The media specialist at Campbell High School in Smyrna, Georgia, champions student voice in the recording studio and equity across the school.

One of the most popular places in the library at Campbell High School in Smyrna, Georgia has nothing to do with books. It’s not even the biggest or fanciest space in the school’s brand new 12,000 square foot learning center.

But the library’s recording studio is where you’ll find most students when they have a free moment, waiting their turn to get in front of the microphone, lay down a track, and freestyle new verses.

The studio exists thanks to the work of Campbell Library media specialist Andy Spinks, who had long dreamed of offering such a resource to his students.

“His vision for a dynamic, student-centered learning space has resulted in the most successful media center in Cobb County Schools,” Campbell Principal Jeanne Walker wrote in her nomination letter for Spinks. .

Spinks is one of two full-time media specialists at the library at Campbell, a large suburban school north of Atlanta. It serves over 3,000 students, of which 40% are black and 33% are Latinx. More than half of the students come from economically disadvantaged homes. Campbell is also home to an International Baccalaureate magnet program with another 300 students mostly from outside the district.

Spinks says he is fortunate to serve all of his students with a well-funded and well-supported program, with a library media stipend of more than $28,000 per year, in addition to $12,600 per year for part from the school’s online research databases, e-books, and audiobooks purchased at the neighborhood level.

A “magical set of circumstances,” including receiving equipment from a local music store run by a Campbell alum, made the studio an instant hit, according to Spinks.

While students and teachers have used the space for everything from recording podcasts to auditioning tuba solos, by far the most popular use of the studio is hip-hop.

Spinks bought a local Grammy-nominated producer for a training session, and a then-senior helped with the technical aspects of the recording. The studio became very popular, attracting students to the library who otherwise would not have come. 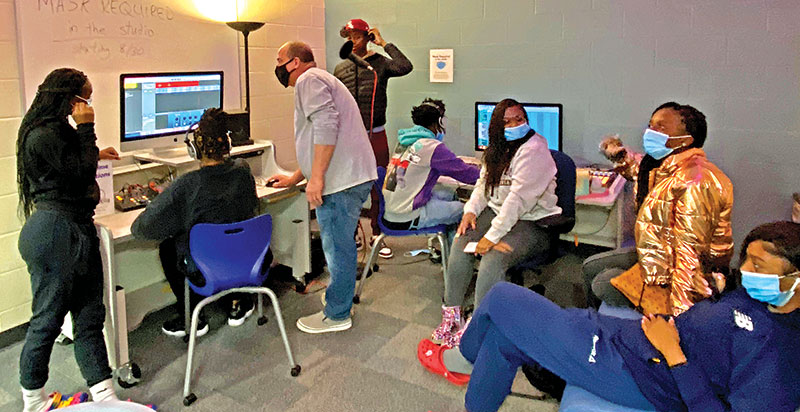 Spinks has only two rules for students using the studio: no leads of bullying other students and no references to gang affiliations. Its aim is to create an open space, where the learning of everything from intellectual property to the science of sound and literary devices takes place alongside the creativity and self-expression that students discover over the course of their cooperation. Some educators have questioned hip-hop as an educational tool and are concerned about offensive lyrics. But cultivating a library based on freedom of expression is a central tenet of Spinks’ philosophy.

“It says who and what is welcome in our library, that there is a space in the library where hip-hop is not just tolerated, but encouraged,” Spinks says. “To me, it’s a place where you can create, find your voice, and express yourself in ways that the program doesn’t give you the opportunity to.”

Spinks has also curated a collection that reflects his students, bringing the same level of attention to representation in non-fiction as in fiction offerings. He gave presentations on the library’s privacy protections to ensure LGBTQIA+ students feel safe researching books without fear of being unmasked. It also eliminated late and lost book fees.

“It’s hard enough to get kids to read without those other obstacles,” Spinks says.

Spinks deals with students in other ways. Recently, the district created a new initiative to provide students with laptops, provided parents choose to register online.

Spinks pointed out that hundreds of students, and those who needed the program the most, had not registered email addresses for their parents. Also, most of the letters were written in English. Spinks and another librarian worked with the parent coordinator to translate the materials into Spanish to reach more families.

Calling attention to these issues has not been without reaction. In 2019, he and Campbell math professor Sandi Yoder led an anti-racism book study for faculty, and last year Spinks launched Cicely Lewis’ #ReadWoke program. Although the program was well received by students, teachers and administrators, district officials demanded that the study of faculty books be moved off campus and that the #ReadWoke program be canceled.

Despite these challenges and the current wave of nationwide censorship, Spinks remains committed to defending freedom of expression and representation, and Yoder says the dedication has been inspiring. The Georgia Library Media Association named Spinks its recipient of the 2021 Intellectual Freedom Award. But another recognition really surprised Spinks.

Unwell at home on a Friday in February, Spinks watched a live broadcast of Campbell’s annual Martin Luther King, Jr. Humanitarian Awards program. Students select the winners, and it is one of the school’s highest honors.

Suddenly, Spinks’ photo appeared on the screen. “Mr. Andy Spinks has gone above and beyond helping a multitude of students in many ways, shapes and forms, from technical issues to just saying hello with a warm smile,” one student read. “He gives all students equal opportunity and pays for every child that enters the library.”

Spinks calls the award validation that his “wacky ideas” are on the right track. That, and being named a finalist for School Librarian of the Year 2022, “definitely inspires me not to let hindsight discourage me.”

“Our library is busy,” Yoder said. “He’s made it the center of the school now.”

An annual award given by School library journal (SLJ) and sponsored by Scholastic, the School Librarian of the Year award recognizes a K-12 library professional for outstanding achievement and exemplary use of 21st century tools and services to engage children and teenagers to foster multiple literacies. The judges were: Amanda Jones School Librarian of the Year 2021; Dr. Mike Daria, Superintendent, Tuscaloosa Municipal Schools (AL); SLJ publishers; and a representative from Scholastic Trade Publishing.

Learn more about the award and past winners at slj.com/SLOTY.

Andrew Bauld is a freelance writer specializing in education.